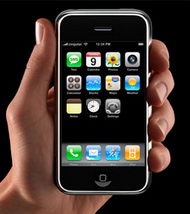 It’s been two days after Apple announced its entrance in the mobile phone market. The long-time rumored iPhone was finally presented at the MacWorld and… people are delighted. Everyone expected Apple to make a hit, but iPhone went one step further presenting some new concepts. Now, what we want to do is to separate the hype from the facts. Let’s start…

Let’s face it, Apple created the gorgeous device. There is no other device that can match its style. Furthermore, the iPhone brought other things on the table – the new mobile OS, usage of sensors, a large multi-touch screen… Apple has a large and quite loyal iPod user base.

iPhone is NOT a 3G device. Will it be until it hits Europe? It’s hard to say at the moment. One thing is certain, 3G implementation should not be a problem for Apple. Next, battery is not removable (as in iPod), memory can’t be expanded (as in Nokia N91 and Sony Ericsson W950i), it doesn’t have a top-notch camera and it does not supports Microsoft Exchange or Office.

Among the Symbian-based devices, we could argue that iPhone competes with all of the Nokia NSeries devices, as well as Sony Ericsson W950. Two of the other Sony Ericsson smartphones and Nokia ESeries devices are enterprise focused and will most probably not be disturbed by the Apple’s invention.

How will users react – will they stay loyal to Nokia/Sony Ericsson? I don’t think so. It’s just that Nokia NSeries devices and Sony Ericsson W950 (and other Walkman branded Sony Ericsson phones for that matter) are mostly designed for all around entertainment and always-on lifestyle. Yes, they are powerful mobile computers, but personally I don’t think that many users of these devices use their full potentials. Most of them want to listen to music, surf the Internet, watch a movie and maybe take a photo. For them, iPhone with its coolness will most probably be a better choice, especially if they already buy songs from iTunes.

How will iPhone affect the Symbian world and all smartphone world. It all depends what will Apple do with its mobile platform. According to some reports, mobile Mac OS X used on iPhone will not be open, leaving only Apple with its partners to develop software for it. My opinion is that this will lead Apple to death of its device.

But, take a look at other scenario. Apple could quickly get many software developers that already make applications for the desktop Mac OS to write application for the iPhone. Just imagine transferring some of the popular Mac apps to the new iPhone. We could see hundreds of real applications developed for the new platform within a short period of time, if Apple decides so. We should also acknowledge that this is the first version of the Apple’s mobile OS and that it could have some problems, but wait… for the first version it is awesome.

Apple certainly brought new cards on the table, and it will be interesting to watch handset manufacturers competing with the iPhone.

If I’m at Nokia or Sony Ericsson, I would be worried. The smartphone industry just got a new player. I do understand that it’s not easy to disturb the industry, but if you remember Sony used to dominate the portable music players before Apple come with its iPod.

Next, we could add that today’s iPhone certainly resembles some of the Nokia’s plans for the future. So… hire more smart people and get us even better devices.

Hint: Stefan Constantinescu from Ring Nokia is someone to seriously consider. 🙂