During the Apple’s WWDC keynote, Steve Jobs confirmed the iPhone’s release date (June 29th), but also mentioned the time — the iPhone will be available from 6:00 pm. However, Jobs left us wondering whether he meant 6pm PST, or 6pm in each location. 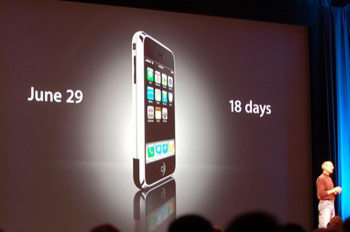 In the other Apple mobile-related news, quazi support for iPhone developers have been announced. iPhone (actually the built-in Safari) will support Web 2.0 apps (does this include Flash apps?) — developers will only have to modify the screen size to suit the one of the iPhone. Not exactly an SDK we wanted. Still better something, than nothing… (via: engadget)

Gizmodo got the hot piece of information we've been waiting for. Apparently, the Pearl's successor is coming in Q4 this...