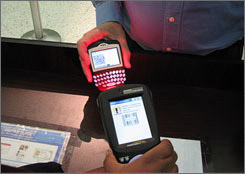 Paper-based boarding passes are about to be a thing of the past. But, before that can happen, airline carriers will have to make sure that all those digital boarding passes won’t muck-up their daily operations. So, following on the IATA’s approval of a global digital barcode standard, Continental Airlines has kicked off trials of the US’s first cellphone-based digital boarding passes. The barcodes will be issued to air-travellers at Houston’s Intercontinental Airport, and will be scanned at the gate to verify ID.

Actually, the digital boarding passes will use something that us Yankees aren’t too familiar with – the QR code. The square jumble of black and white blocks has been used overseas to great effect, and it seems the US will start to make more use of the information-dense QR codes in the future.

Continental Airlines will be running the mobile phone boarding pass trial for 3 months, during which paper boarding-passes will be issued to travelers wary of the move to an all-digital system.

We’re crossing our fingers for a successful trial – hopefully the digital boarding pass system will spread to other carriers and airports.

We're not surprised to see this Nokia 6263 hit T-mobile's network, but we are excited to see that it's finally...