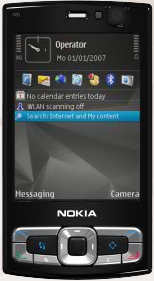 Given I have a newborn that occupies all of my non-working time (!), I am not quite sure how I managed to find the time to slot in this bit of (delete as applicable) research/twiddling/tweaking/testing – however, I thought I would share the results…

Some of you may have also tried this, but below is my take on what I found, and why it’s interesting in respect of Mobile. If you have tried something similar and it did/didn’t work I’d encourage you to drop us a comment – we love to hear from you!

So I recently tried out some software called TVersity – this is a free Media Server than runs on your PC, enabling you to share out content across your home network (which, lets face it, most people have these days, due to broadband modem). It has a Flash interface, which provides you a GUI to configure which media you want to ‘show’ (kinda like Windows file sharing, only much more interesting!). In fact, we’ve mentioned it before on IntoMobile

I selected a bunch of images, video, and audio, and selected this for sharing. I then set the PS3 to look for Media Servers, and lo and behold, it found the TVersity server running on my PC. Nice!

It was at this point I rememered some testing I had done at a Mobile Operator I used to worked for – at the time I was checking the Nokia N80, and it’s capabilities with something called UPnP (Universal Plug and Play). The tests I had done connected an N80 via UPnP over WiFi, to a Phillips Media Display box, which was linked to a Plasma Panel.

Given the N80 had a (much) earlier revision of the N95-8GB firmware (which is my current phone of choice), I figured it might be worth seeing if the Media Server option was still available on it – and it was!

A few tweaks here and there (involving a manual restart of the N95-8GB, just to make sure I was going to get the best performance possible), and soon I was streaming audio, video, and images to my TV!

No doubt you will have read Stefan’s post on the N95-8GB being DLNA-certified, and wondered how it might be useful – well, if you are lucky enough to have a PS3, which you are connecting wirelessly to your home network, and you have an N95-8GB, you can give this a try and find out!

I highly suspect this cool piece of ‘connected home’ tech-funk will work on the other NSeries devices since the N80 – my first thoughts coming to devices such as the N93 and N95, but pretty much any with WiFi, and the ‘Home Media’ icon should work! The reason for this is that UPnP and DLNA are essentially the same standard (or rather DLNA is a spin-off from the original UPnP standard).

Next, some anecdotal comments on the performance I encountered:

I do think it’s always reasonable to ask the question “why is this useful to me” of a mobile service, device, or feature – and so I’ll share my current use-case with you. As it happens, I have a number of photos that I have taken of our newborn, and I have been able to share these with friends that came round – on our TV rather than huddling round a mobile device! Suffice to say that everyone has been amazed at the simplicity of the feature, and love being able to see the pictures blown up to poster size!

Tune in again soon for the next adventure with mobile technology!