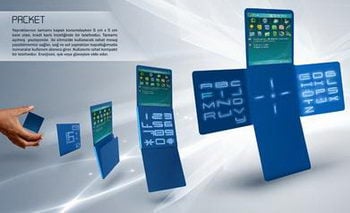 Here’s an interesting mobile phone concept designed by Emir Rafat. The cool thing about it is that it’s made to be an all-in-one device, sporting a total of 5 touchscreens which change to suit the current application used. That being said, you can use a numeric keypad or a full QWERTY keyboard which is divided on two screens.

Packet phone concept measures 5×5 cm, it’s extremely thin and lightweight, and is thus ideal to carry around. The problem, though, is that I don’t see it being released in the next 5 to 10 years. Hack, I can’t imagine it being released even after 10 years. Most of the technologies needed for the device are already on the market — including thin touchscreens, fuel cell batteries (which could provide sufficient power for such a small device), single multiple radio chip solutions. Still, it seems like a huge step forward which would involve a great paradigm shift. Not that I wouldn’t want such a device, quite the opposite – I would love it! So I wasn’t surprised to learn Packet phone concept won first place at the Istanbul Design Week.