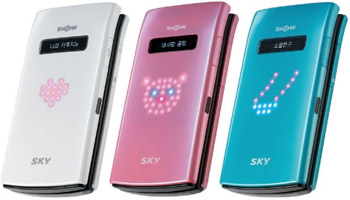 Sky in Korea has recently launched a new “Neon Sign” HSDPA clamshell. What’s interesting about it is the fact that it has 49 LEDs on the front panel which can display different icons. Naturally, you can customize those LED notifications, so for instance when your ex calls you, the LEDs could form the big “X”, suggesting you to think about before answering. 😉

The phone is available in white, sky blue, pink and black for about 400-500 USD.

The designer which has already proved his company can do wonders with phones like the Nokia E90 Communicator and the...