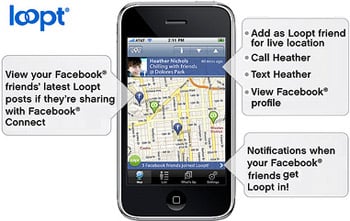 Loopt has announced that it has began working with Facebook Connect to allow users to connect with their Facebook buddies, while on the go. Accessing Facebook from a mobile phone is nothing new, but Loopt’s idea is of course to integrate the power of Facebook into its own platform. As a result, user will be able to share and discover recommendations for nearby businesses, integrate location awareness into their Facebook feeds, and easily find and connect with Facebook friends both on and offline.

“Began working” means you can’t have it right now. According to the official release — which follows after the jump — these new features will first hit the iPhone in late summer. Shortly thereafter the updated Loopt will be available on BlackBerry and feature phones across Verizon, Sprint Nextel and Boost Mobile.

PRESS RELEASE – Loopt, a revolutionary social-mapping and communication service, today announced that it has joined Facebook Connect to allow users to “connect” their Facebook identity, friends, and privacy settings to the Loopt service.

Facebook gives everyone the power to share with the people they care about making the world more open and transparent. Facebook users communicate through the social graph, the network of connections and relationships that exist in the world between people. With more than 90 million active users, Facebook is the fourth-most trafficked website in the world.

Facebook launched Facebook Connect to allow users to take their identity and friends with them around the Web, while being able to trust that their information is always up to date and always protected by their privacy settings.

Loopt offers the most intuitive and effective privacy controls and security features for end users. Loopt is 100 percent permission-based and users share location information only with their selected friends, communities and services. Users can easily turn location-sharing on or off at any time. Loopt regularly works with organizations such as the Family Online Safety Institute, ConnectSafely.org, Progress & Freedom Foundation’s Center for Digital Media Freedom, and the Internet Safety Task Force.

The enhanced capabilities will roll out to consumers in late summer and will initially be available to Loopt users via the iPhone App Store. Shortly thereafter the features will be made available on BlackBerry and feature phones across Verizon, Sprint Nextel and Boost Mobile. For more information please visit http://www.loopt.com.

Nokia makes peace with Qualcomm with a new agreement

Nokia and Qualcomm today announced that they've reached an agreement to settle all litigation between the companies. The new agreement...