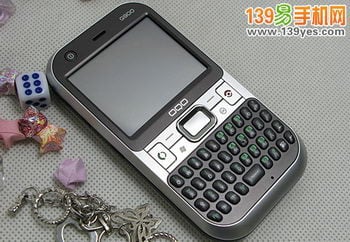 What we have here today is a new ripoff device wearing the OQO branding, while at the same time resembling some of the Palm’s popular smartphones – Treo 500 or Centro. According to UMPC Portal, OQO has nothing to do with the phone and “the manufacturer is not authorised by or affiliated with OQO in any way.”

The strange thing, though, is that apparently this device runs Windows Mobile 6.1. How on Earth they managed to get a license from Microsoft is beyond me. It’s clearly a ripoff device and I don’t see a reason why would the Redmond giant go this way.

Other specs include quad-band GSM/GPRS/EDGE radio, 2 megapixel camera, 624MHz CPU, 128MB RAM, Bluetooth and WiFi. On the downside, we don’t see a sign of 3G, nor an option that the OQO G900 will ever hit the Western hemisphere…

Just when they unveiled that Gameloft will make its games optimized for the JS1 controller, Zeemote announced a new "partner...