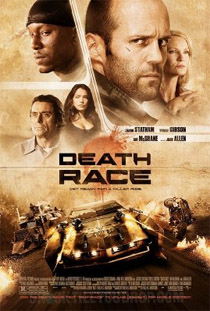 Pushing the limits of the mobile racing game, Gameloft’s Death Race captures the full throttle action of the film’s dystopian world in which the most extreme racing competition has emerged and its contestants are murderous prisoners. Race in one of the film’s seven “Steel Beasts,” each one with a different play style and armed to the teeth. Armor up and throttle down for the game’s five-episode “Story Mode,” which runs a gauntlet of challenges ranging from “Race,” “Rampage,” “Eliminator,” “Shooter” and “Boss Battles”-featuring a mix of shooting and racing. Complete the “Story Mode” and unlock the “Single Race Mode,” which allows fans to blast through all of the Death Race tracks and challenges.

Of course, as the game progresses, you will unlock new cars and even better weapons, while your opponents will become better at the same time…

In a nutshell, we expect tons of action driving fun later in the month, when Death Race will be launched on all major carrier decks. As for the movie, it’s opening in theaters is scheduled for August 22nd.

Coca-Cola launches biggest Bluetooth campaign ever for the Olympics

The 2008 Summer Olympics in Beijing have started on Friday. Many of the world's largest companies are trying to bind...