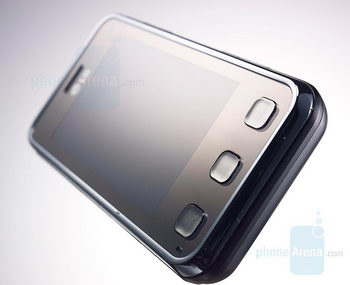 Back in July we’ve first heard LG is working on a 8 megapixel cameraphone. The day has come and today the Korean electronics giant is officially joining Sony Ericsson (C905) and Samsung (INNOV8) with its KC910 handset.

The so called Viewty successor is very cool lookin’ device sporting nothing but a huge 3-inch WQVGA (240×400 pixels) touchscreen in a 14mm-think body. But it’s not all about the LG cameraphone’s megapixel count — the technologies involved in the camera software include option for manual focus, digital image stabilizer, face, smile and blink detection. Then there’s a Xenon flash and the lens wears the Schneider-Kreuznach seal.

As for the release date, LG says the KC910 will come to the market in October of this year.

It's not just Goldstriker which has prepared the iPhone 3G Diamond edition. Now we have Swiss luxury designer and jeweler...