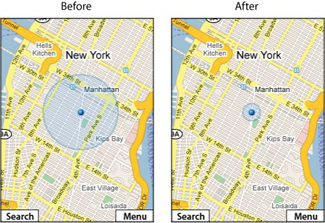 Google Maps had released a handy feature for mobile apps last year which would detect the cell tower you were using in order to figure out your general area, though it wasn’t quite as precise as honest-to-goodness GPS. Well, Google has recently found a way to determine a cell tower’s coverage area, and will be incorporating that info into the My Location feature. If you’re in a densely populated area, you’re probably using a smaller cell tower, and so your location is within a smaller radius, making it easier for Google-powered mobile mapping apps to zero in on your location more accurately, even if your device doesn’t have a GPS unit. For folks in more rural areas, they’ve tweaked the centering system so that it will move to the closest city rather than cell tower (since it might be a ways outside of town). Cool stuff all around, and offers a lot to folks with more down-to-earth cell phones.

Windows Live Search has been running their standalone voice-activated search and location app on BlackBerry since mid-July, but it looks...