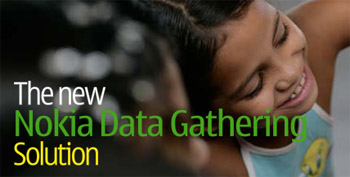 The Nokia Data Gathering software will be available to public sector organizations and NGOs free of charge. It can be used to create tailored questionnaires and distribute them to multiple mobile phones using a normal mobile network. Field personnel surveying local conditions can quickly complete the questionnaires and immediately transmit their findings to a central database. The system also allows organizations to geo-tag data with GPS location information to build a more detailed picture of very local conditions.

Brazil’s Amazonas State Health Department will be the first to use the solution as part of its fight against dengue fever in the city of Manaus in Northern Brazil.

Starting from next month, 50 field personnel equipped with Nokia E61 and Nokia E71 devices will take to the street in the metropolitan region of Manaus focusing initially on dengue fever. The program will then be expanded in 2009 to cover the whole State of Amazonas, with SUSAM’s 600 field agents gathering data on the fight against dengue fever, malaria and yellow fever.

The software was developed by Nokia and Instituto Nokia de Tecnologia (INdT), a non-profit research and development center in Brazil. The Finnish giant will be donating licenses for the Nokia Data Gathering software to public sector organizations and NGOs.

Nokia has released the new firmware for its N96 smartphone. Kinda strange when you consider that the device has started...