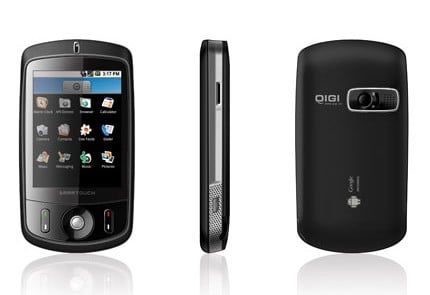 Qigi has released a new handset that will run not only a Windows Mobile 6.1, but Android as well. The specs are decent, except maybe the lack of 3G, but for an Android handset nicer-looking than the G1, most folks will be willing to let that slide. Hilariously translated specifications include:

The i6 will have e-mail and handwriting recognition for the touchscreen, as well as English and Quanpin language support. As usual, don’t expect this one overseas, but it does go to show that manufacturers are willing to take another stab at Android hardware.

Qigi i6 from the front

Qigi i6 from the left side

Qigi i6 from the right side

Qigi i6 from the back

Qigi i6 with open battery door

Seems like the Nokia E71 on Rogers is turning into a bit of a saga. Ok, maybe not a saga,...