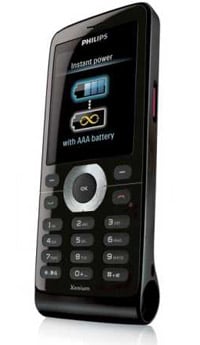 Philips may not be known as a high-end mobile phone manufacturer. However, they are known for making mobile phones with great, if not exceptional, battery life. That being said, we’ve spotted a new Philips phone called Xenium X520.

What makes this candybar apart from other handsets on the market is that it can use standard AAA batteries as a supplementary source of power. That, however, doesn’t mean the X520 can’t live for long on its regular battery. The phone can sustain up to 8 hours of talk time and up to a month of standby time!

With that kind of battery power, you may forget to charge your phone. Enter Backupower, the technology of backup power that will add up to 2.5 hours of talk time and up to one week of standby time with standard lithium AAA battery.

Too bad we’re not talking about a smartphone here — otherwise, I would instantly buy it in March when it starts selling.

Alpine has a new in-car digital media receiver in its offering. It's the iXA-W404 2-DIN and it lacks CD/DVD mechanism....