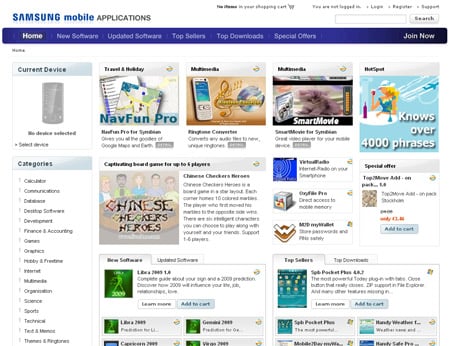 In partnership with PocketGear, Samsung has launched its mobile application store for all its smartphones whether they run Windows Mobile or Symbian S60. In total, there are about 1,100 apps available in the catalog and that number is expected to grow with the time.

On the downside, though, Samsung’s app store is initially focused on the UK market, but we guess the Korean giant will expand its offering to other markets in the near future.

For one thing, the new store will benefit Samsung Mobile Innovator members which will be able to easily make their applications available to a potential audience of millions of Samsung mobile customers. All members are automatically setup with a Samsung Mobile Applications account, eliminating the need for yet another registration.

There’s also one thing we’re not sure about, though. We don’t know how the new store integrates with mobile phones. Do we still have to sync all the apps purchased or there’s (or there WILL be) some system (mobile app perhaps?) for downloading apps directly from a handset. Until we find that out, you can check out Samsung Mobile’s store from here.

The Toshiba TG01's slim profile, huge touchscreen display, and powerful Snapdragon silicon make it a Windows Mobile smartphone to be...