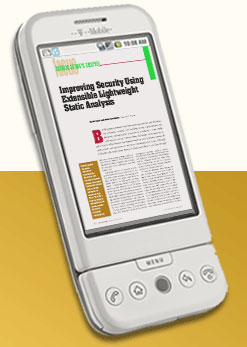 BeamReader, a steadfast PDF reader for BlackBerry, is soon making the leap to Android, joining the ranks of MultiReader. Adobe’s been focusing most of their attention getting Flash onto the G1 rather than document viewing, which makes sense, but still leaves a bit of a function gap for the document-laden business-folk. BeamBerry doesn’t horse around with needing to do server-side processing, but still manages to render documents in their original fidelity, with fonts and all. BeamReader showed off their impressive BlackBerry software at the Wireless Enterprise Symposium, and I suspect they’ll do an equally bang-up job for Android. For e-mail notifications when BeamReader is ready on the Android Market, head over to SLG Mobile’s site.

With only a few days left before Mobile World Congress gets underway in Barcelona, the announcements are bound to start...