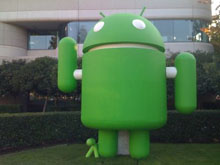 Here’s a little bit of fun Android news. Have you ever wondered what the Android Robot’s name is? Michael Martin over at GoogleandBlog sent a few Google engineers and other Android developers the very same question.

Developer Alexander Muse of Big In Japan noted that he calls him ‘Mike’. To the best of his Alexander’s recollection, all of the Google staffers he talks to refer to the Android at ‘Mike’ as well.

However, the Google engineers Michael heard back from told him that they call the Android ‘Droid’ or ‘BugDroid’. They also noted that the huge Android outside of the Google offices is referred to as ‘BigDroid’ and the little dog is ‘Alex’.

Just some little news here for the Android fans. Thought it was fun.