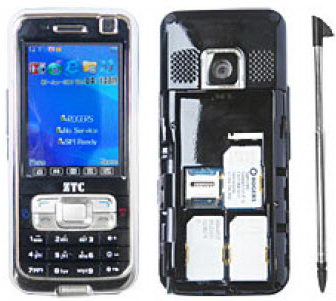 Some time ago, we wrote about the 3 SIM mobile phone from China. The article about it is still one of the most popular posts on IntoMobile, indicating that some people really dig the idea of having 3 SIM cards in a single device. Unfortunately, at that point we haven’t got the clue where exactly you can purchase the device except “somewhere in China,” an information that obviously wasn’t good enough for many readers.

Now we spotted a similar handset called Airello Q-3SIM-3Band-GSM-XUV that is made by the company called QiiQ EcoCarrier, which operates out of RAK Free Economic Zone in UAE.

Specs wise, this fairly ugly device comes with a 2.4-inch QVGA touchscreen, 2-megapixel camera, Bluetooth connectivity support, microSD memory card slot, media player, and a solid 2000mAh battery. Something tells me the quality just isn’t there, hence I can’t recommend you to grab it immediately. Moreover, you should know that although it does accept 3 SIM cards, only 2 phone numbers can be active at a time.

The no-contract world of wireless service is a rough and tumble place. With low-cost carriers jockeying to offer the most...