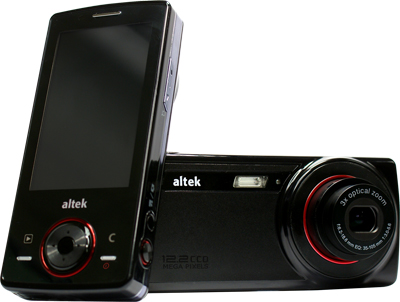 Hooah, the Samsung Pixon 12 and Sony Ericsson Idou have some unexpected company. Altek, a relatively unknown Taiwanese camera manufacturer, is getting into the phone game with the T8680, which baosts above all a 12 megapixel camera with 3 x optical zoom, dedicated image processor, aperture ranging from F3.0 to F5.6 and up to 3200 ISO. A notable feature is the use of a CCD sensor, which is less suceptible to image noise and have higher light sensitivity than traditional CMOS sensors, although they tend to gobble up more power. VGA-resolution recording and TV-out make it an ample video device as well, but it’s otherwise a fairly unremarkable Java-based phone with all the usual fixings (tri-band EDGE, Stereo Bluetooth, 3″ QVGA touchscreen, FM tuner, 1020 mAh battery).  It’s pretty unlikely we’ll see this on our side of the pond, but if you happen to be in Taiwan, you’ll be able to nab the T8680 later this month for 3000 yuan. You can get a closer look at the features and specs over here, or check out some hands-on pics of the user interface from the launch.

The Samsung U960 first spotted in a leaked roadmap for Verizon not too long ago, and now we've got some...