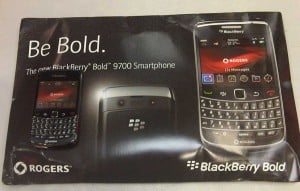 Rogers is gearing up for its imminent BlackBerry Bold 9700 launch with some promotional materials, as you can see. Both Bell and telus will also be picking up the latest and greatest smartphone from RIM in November, so presumably we’ll be seeing the same kind of stuff in their stores shortly. Wi-Fi, GPS, a 480 x 360 display, 3.5mm headphone jack, 3.2 megapixel camera with flash, the fancy new optical trackpad and a slimmed-down form factor make the new Bold a prime candidate for older BlackBerry users looking for an upgrade. If you’re one of them, it’ll cost you $299.99 on a three-year contract with Rogers after rebates.

As a side note, with the Storm2 and now the Curve2 coming out, I’m kind of left wondering why they didn’t name the 9700 the Bold2.

It wasn't that long ago that Dusan speculated the Nokia Surge may make an appearance on the Rogers network in...