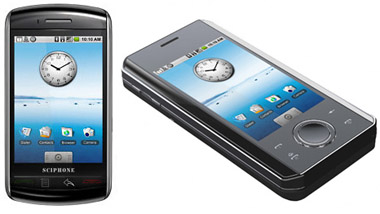 We’ve already talked about SciPhone’s Android efforts. Now the company which seems to target the very low end of the smartphone market is out with two more devices, both “seemingly” resembling existing handsets.

The first of the two is marked as N19 (pictured on the left), and as you can see for yourself, it looks too Storm-ish for my taste. On the other hand, the more expensive N21 model resembles the not-that-popular General Mobile DSTL1. The good thing is the price – N19 could be yours for $150, whereas the N21 costs $235.

So in a way, you can think of those two as super cheap tickets to the Android world. In that sense, I’ve no doubts RIM’s and General Mobile’s lawyers will be laughing on their way to the bank. 😉