The new Bold’s construction left me a little disappointed on a number of fronts. The first thing I noticed was how the keys along either edge lifted up significantly, not only revealing a distracting backlight, but also being a potential hazard for getting caught or pulled off. Besides failing to protect those keys from the side, the lack of a level siding also means that when you place the device face-down, the keyboard takes the full contact, which could be bad news for long-term wear and tear.

The battery door felt rather flimsy, and would often have trouble sliding back into place. Part of that might be due to the new locking mechanism – four separate tracks on the device need to line up with notches in the door, and if any one of them are misaligned, you’ll get an unsightly gap. Overall, the 9700’s construction is at best equal to the original 9000, and definitely not any better. 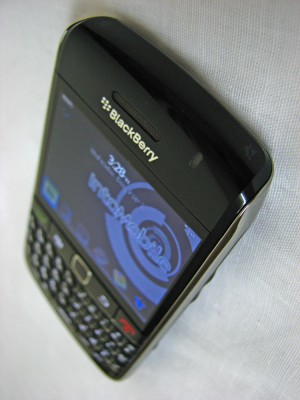 In terms of straight-up looks, the 9700 Bold does very well. The beveled edge along the screen running to the top of the device is brand new, and the updated side button design and optical trackpad first seen in the 8520 Curve are very welcome. Although the leather backing doesn’t cover as much area as on the original Bold, it still keeps up the executive feeling. I continue to find the new top-mounted Lock/Mute button impractical, since it’s incredibly easy to accidentally hit them; there’s nothing quite as embarrassing as blasting music from your speakerphone in a quiet dentist office after pocketing your BlackBerry. The side layout (keys, microUSB jack, headphone jack) is identical to the Bold 9000, so on that front, it was an easy transition going from one to the other. I was a little disappointed that the new Bold didn’t adopt the style of the Storm2 and Curve 8520 to incorporate Menu, Back, Call, and End keys into the front face – the seamlessness was very stylish, and would have earned the 9700 some serious brownie points.

Realtor.ca, Canada's most popular and best known site for realty searches and just plain old realty shopping, has launched a...