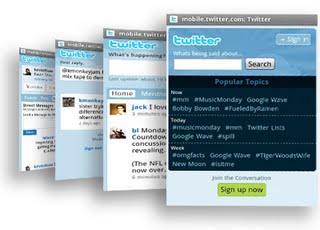 For those who couldn’t be bothered with the plethora of mobile twitter applications out there, the official mobile website is undergoing an overhaul that incorporates exclusively their own APIs. The new site’s designer notes that anything with a Webkit browser (like the Android, iPhone, Symbian, and webOS handsets) handles the update like a champ, but BlackBerry is still going to need some “fine tuning”. The old mobile site was at very least in need of a facelift at very least, and the retweet, favourite, and reply functions are nice to finally have included. If you’re looking for an alternative, Stefan tends to use Dabr, and as far as I can tell, it’s still a little more robust with stuff like lists and twitpic support. In any case, you can find the new mobile twitter page at mobile.twitter.com, and will soon replace m.twitter.com.

MySpacers, RIM has recently launched version 2.0 of the MySpace app, in case you missed it! To get your mitts...