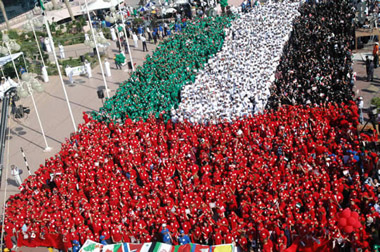 UAE’s Telecommunication Regulatory Authority (TRA) said that mobile subscribers in the country reach over 10 million subscribers this year. The number, which doubled in the last four years, represents an unprecedented mobile penetration rate of over 200%. As a result, UAE is now one of the highest penetration markets in the world!

According to TRA’s HE Mohammed Nasser Al Ghanim, this achievement was made possible through the development of a regulatory framework that aims at “creating sustainable, vibrant and fair completion.” He also emphasized that the framework “has been instrumental in ensuring the emergence of more attractive pricing offers and the introduction of innovative new services within the market. It has also created an environment conducive to investment, as evidenced by the significant levels of infra structure investment undertaken by Etisalat and du in recent years.”

For the record, the UAE region represents one of the world’s fastest growing mobile subscription markets with a 47% year-over-year increase in 2008. It is expected that the Middle East and North Africa telecommunications market continues to grow in 2010, despite the economics downturn…

Photo sharing service Photobucket.com and Ontela, provider of imaging services for operators, announced an agreement to merge their operations. The...