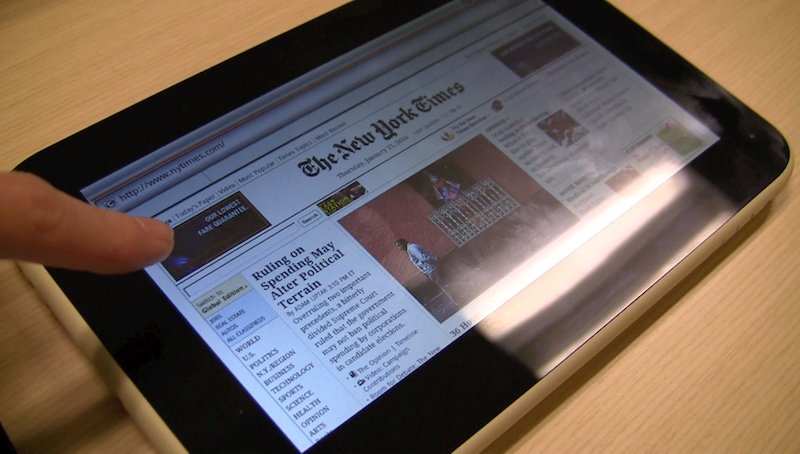 Tablet chatter this week might be skewing heavily in Apple’s favor, but if you can manage to wrestle yourself away from the hype around Apple’s admittedly sexy iPad, you might be interested to see what other tablet makers are working on. I had a chance to stop by NVIDIA’s headquarters recently, where the Tegra team showed me a couple super-early prototype Android tablets powered by the company’s new Tegra2 multi-core processors. Compared to the iPad, the Android tablet prototypes are far more flexible and functional than Apple’s tabet – they are Flash compatible, feature front-facing cameras, support multi-tasking, and have expandable storage options. If you want a tablet, but hate iPhone, these tablets might be for you.

The video you see here shows two tablets. The black tablet on the left is made by a company called ICD and features a 7-inch resistive touchscreen. The beige tablet on the right is made by FoxConn – the same company that manufactures iPhones for Apple – and boasts a generous 10-inch resistive touchscreen. More importantly, though, both tablets are running on the NVIDIA Tegra2 1Ghz multi-core processor. Thanks to the dual-core Tegra2 CPU and the dedicated GPU core, both tablets made quick work of web surfing, Flash animations, HD (true 1080p) and high-resolution photos.

Notice how quickly high-res photos load and the smooth HD video playback. My new MacBook Pro was prone to dropping frames when playing Star Trek in 1080p, but the Tegra2 had no problem handling the huge video file. An NVIDIA Tegra2 developers kit was also hooked up to play Unreal in full 3D. The game played as smoothly as I remember playing on my desktop computer some years ago. That’s a testament to NVIDIA’s pedigree in graphics processing.

The prototype tablets were still getting some Adobe Flash-related kinks ironed out, so I couldn’t show you Flash video playback. But, you can clearly see that other embedded Flash content works like a charm. Both tablets will e fully Flash 10.1 compatible by launch time, which means that all embedded videos and interactive content will play straight from the web. Try to do that on your iPad.

If you want to play with the NVIDIA Tegra2 platform for yourself, or you feel like trying your hand at manufacturing a Tegra-powered tablet, you can grab the Tegra hardware developers kit here for $400. It’s a bit out of our league, but you tinkerers out there might find the hardware dev kit powerfully fun.

Following on rumors that T-Mobile may be replacing its Sidekick offerings with the HTC myTouch Slide (codename: HTC Espresso), a...