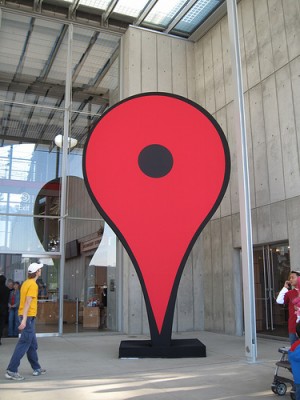 Google has successfully been awarded a patent on location-based advertising they had filed six year ago, firmly planting their foot once more in a determined stride towards world domination. While all mobile platforms will likely be able to take advantage of the technology through Google’s mobile advertising initiative, odds are good that Android will be a focal point of Google’s efforts on this burgeoning market. It also means that if anyone wants to add GPS-based relevence to their mobile ads, it will likely have to be through Google.

Google’s presence in the online advertising world is what would be best described as omniscient – they own AdSense, a matchmaking service us bloggers use to dedicate ad space to Google, who figures out what you’re looking for, and fills the space with contextually-significant ads. As far as mobile is concerned, Google picked up AdMob late last year, the pre-eminent king of mobile advertising, and regular publisher of useful stats (although that deal was so big that it raised some flags with the FTC regarding anti-trust laws).

Location-based advertising makes great sense for an end-user, since the more relevant the ads are, the less intrusive they feel. However, the business model is still in its infancy and unproven – it will take some maturing before Google can truly reap the fruits of this patent win.

Google: Nexus One raised the bar for smartphones

Google sure seems pleased with its Nexus One "superphone," as the search giant's Chief Financial Officer Patrick Pichette said the...