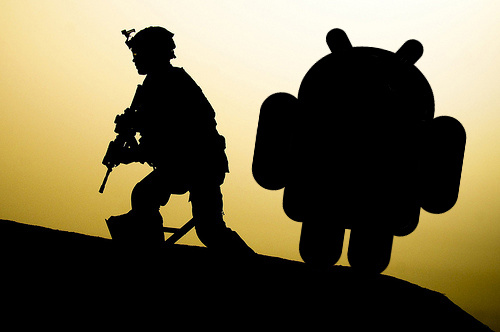 Android is no stranger when it comes to helping out the military. This time around, DARPA (Defense Advanced Research Projects Agency) is utilizing the Android operating system in a different way this time, and in an array of different ways.

DARPA is looking to Android to fulfill many different operations, from humanitarian missions, to disaster recovery. The agency has clearly seen the power behind Android OS, seeing that it’s not just for mobile phones… or microwaves at that. DARPA has clearly sought out such an operating system to meet the needs of their own operations, and Android, in all its open sourced goodness seems to make them rather happy.

Here’s what DARPA has to say:

DARPA is seeking applications to fill a diverse set of needs, including the tactical battlefield, humanitarian missions, disaster recovery, and other mission areas. Example functionalities include command and control, reporting, mission planning, intelligence/ surveillance/ reconnaissance, real-time collaboration, geospatial visualization, analysis, language translation, training, and logistics tracking. For the initial implementation, all apps should target the Android platforms. Special attention must be paid to the apps’ user interfaces and usability functions, as well as striving towards general simplicity and ease-of-use. While some apps will function without network access (except for occasional synchronization or updates), other apps may require more consistent network connectivity. For apps that rely heavily on network connectivity, the emphasis must be placed on minimal bandwidth consumption and application robustness in spite of frequent network disconnection. In all cases, any server infrastructure requirements needed to support the apps should be included as part of the proposal.

So, where the smartphone wars may be just beginning, Android is already looking ahead. From tablets, to MID’s, to military ops applications, you surely won’t be relying on any other smartphone OS’s to help you in the battlefield. The power of the Android OS  is growing, and aint nobody gonna stop it, but maybe itself.