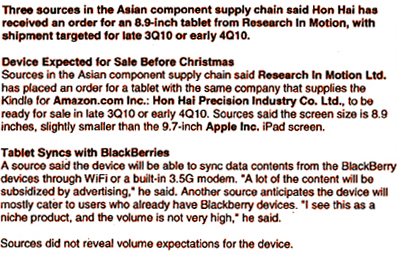 Bust out the saltlick for this one, because it’ll take more than a grain. A research paper has been released claiming that BlackBerry-maker Research In Motion has placed a low-volume order for 8.9″ tablets from Hon Hai, the same Chinese manufacturer that made the Amazon Kindle. Apparently it will be able to sync with a BlackBerry via Wi-Fi or 3G, and be subsidized by advertising somehow. That being said, this tablet will be targeted as a companion device for folks already with a BlackBerry, and would be released sometime in late Q3 or early Q4 this year. A snippet of the report titled “RIMM to Launch Own Tablet in Late 2010” is above, and I think the publishing research firm is OTR Global, but whatever the case may be, this sounds pretty crazy. The last thing RIM needs to make is a freaking tablet version of the Foleo.

Let’s imagine a worst-case scenario: RIM makes a giant BlackBerry Storm, complete with SurePress, in an attempt to chase after the media crowd that Apple is winning with the iPad. A whole new wonky sub-OS is made for the new form factor and functionality, that, when compounded with the BlackBerry’s existing trouble with handling basic stuff like YouTube, makes it unstable and unsatisfying for just about everything. Advertisers don’t get on board because they aren’t convinced anyone will buy the damn thing and app developers don’t touch it with a ten-foot-pole because they have a hard enough time making BlackBerry software.

Now, a best-case scenario: RIM offers a dirt-cheap e-ink-based e-mail reader, like some kind of Peek/Kindle hybrid. Read full e-mails, and hey, maybe RSS content powered by Viigo. Either shunt your e-mails from your BlackBerry to it, or RIM offers some super bare-bones e-mail plan for those who want something simple and to the point. Service would be in the $5/month area, but no instant messaging, apps or browsing (which you wouldn’t want to do on e-ink anyway). Low-power, light and slim, crazy battery life, like a month or two on standby. If RIM was really gung-ho, they could throw a solar panel on the back.

Wait, scratch that. The best-case scenario is that this report is totally out to lunch and no BlackBerry tablet ever sees the light of day.