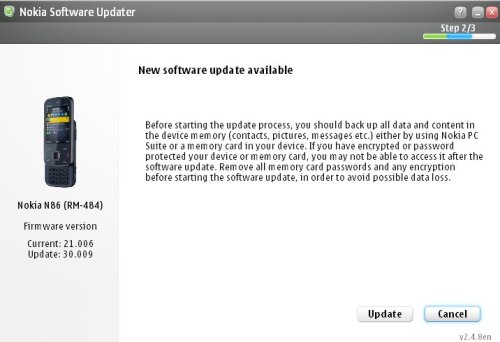 The Nokia N86 8MP got a new firmware update and it’s a heavy one (142 MB). Described as a “Maintenance” update, firmware version 30.009 brings several improvements to Nokia’s first 8-megapixel camera-equipped baby, including:

As usual, we advise you to keep your phone’s firmware up to date; hence we suggest you hit the “Update” button. You can do this either over-the-air or from your PC, using Nokia Software Updater (part of the PC Suite). If you opt for the former method, make sure you’re in some fast hotspot as you’ll be downloading 140 megs of data — this could cost a small fortune on a non-unlimited data plan.

Finally, it’s a good practice to backup all data prior to any firmware updates, despite the fact that the N86 8MP comes with User Data Preservation.

Samsung has launched two new TV-enabled devices for the ever-growing mobile market of India. The new phones include Corby TV...