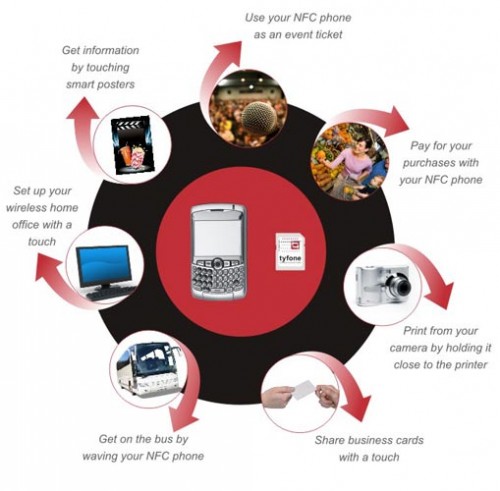 Apple’s new patent for Near Field Communication (iTravel) will enable users to purchase e-tickets for certain events right from their device. While Apple is busy polishing up the capability for the iPhone, it looks like Android may have it out and ready before anyone else.

Near Field Communication (NFC) is a short-range high-frequency wireless communication technology which enables the exchange of data between devices. The tech makes it possible to use your phone to pay for goods by simply swiping it near an NFC terminal. NXC Semiconductors, a manufacturer of  NFC hardware, has said that Android will see the first introduction of this technology. With that said, it means we’re looking at new hardware for this to work on handsets. Are you now thinking twice before you pick up that Droid Incredible?

“First phones will be available this year and some more first half of 2011,” said Henri Ardevol, general manager of secure transactions at NXP Semiconductors.

So in order to take advantage of this technology, you’re gonna have to wait until the end of this year before a NFC capable handset is out on the market, and into the next year before you may have a good choice of devices to choose from. After the hardware comes out, then developers will have to wait for the APIs to get this on devices.

So what use cases could we see with this technology? I wasn’t too familiar with NFC, but a quick Wikipedia search explains all, and it’s quite exiting to see this hit handsets in the near future. E-tickets aside, there is much more to look forward to with a NFC capable handset. When pairing with Bluetooth, one has to become discoverable, pair, wait, connect, and then transfer files between devices. With NFC technologies in place, all someone would need to do to pair to another device is tap their device with the other. Crazy.

What would you like to do if your handset was NFC capable?  You may not have that long to dream of what is possible, as the NFC Androids are coming.

If you're an AT&T customer who's feeling a little frustrated with AT&T's decidedly lackluster lineup of Android smartphones, you're not...