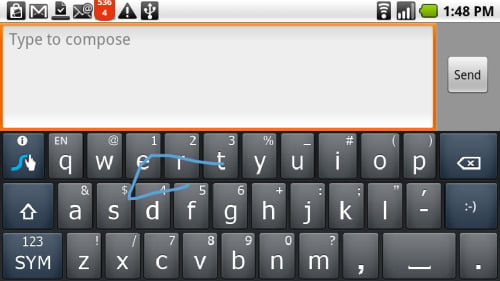 It’s good to see innovative technology be rewarded and I was tickled pink to hear that Swype said it’s technology will be on more than 10 million handsets by the end of the year, according to BusinessWeek.

If you’re unfamiliar with the input technology, it was created by the guy who invented T9 and it lets you trace paths between letters instead of tapping them out. As you can see from the video below, it can be much quicker than standard soft keyboards on Windows Mobile or Android. There was a limited beta for Android that I found to be quite slick, although it did take my reptilian brain about two days to get comfortable with it. It appears Swype will be focusing more on licensing the technology to handset makers rather than doing a direct-to-consumer method.

Granted, it’s toying with letting users install it directly but handset deals are probably a better bet to spread it to as wide of an audience as possible. The Samsung Omnia II was the first U.S. production handset to rock the keyboard and people have already used this to break texting world records. If you’re dreaming of this for the iPhone, I wouldn’t hold my breath.

Swype was approached by Apple and asked to demonstrate its technology, [Swype CEO Mike] McSherry says, explaining that Apple was impressed with his product but later expressed “disappointment” when he said Swype was licensing it to other phone makers.

Interestingly enough, Swype said the fact that it’s not on Apple products actually helps it during negotiations because it is an easy way to stand out from the iProducts. There’s no official version for the iPhone OS but a Swype engineer has created one in his spare time, the company said. Check out the video below for a demonstration of Swype versus the iPhone’s software keyboard.