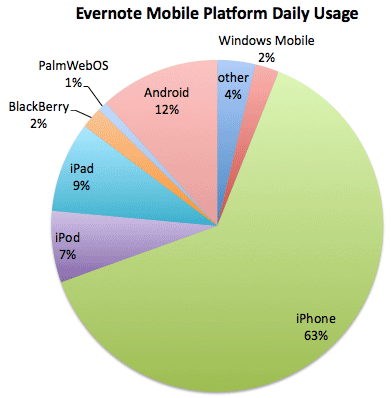 My favorite note-taking tool Evernote is now used by more than 3 million people.

According to the “official blog post,” this milestone has been reached in record time. They crossed the 1 million registered users mark after 15 month, 2 million after 7 months and only 4 months for the third million. In other words, more than 8,000 new users registered for Evernote every friggin’ day, with 44% of them not being from the U.S.

Kudos to Evernote folks, they deserve all the glory as they keep providing the excellent service to both its partners and customers. Speaking of partners, 15% of new users came from Evernote partners which integrate note taking capabilities into their respective services.

As I said it in the past – I rely on Evernote to store all the business cards I gather. Thanks to Evernote’s OCR magic, I can easily find any business card from both my computer and my mobile phone.

OpenTable, the online restaurant reservation service which also has its mobile application for various platforms, issued a press release with...