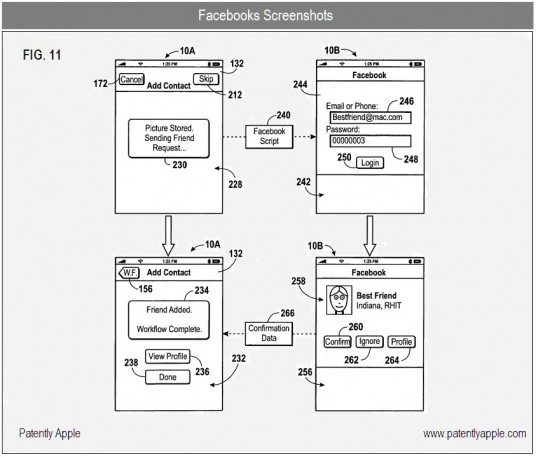 BlackBerry, webOS, and Android are all pretty tightly interwoven with Facebook, pulling in stuff like profile pictures for caller ID, and populating the native address book with whatever e-mail addresses, calendar with events, and phone numbers that happen to be available. We already knew contacts and events will be included in OS 4, but a patent application is leading us to believe that near-field communications technology will also fit into the implementation.

There’s been talk about NFC on iPhone for some time, and social networking certainly isn’t the only NFC function Apple’s looking to exploit. The NFC interaction can initiate a vCard swap, which allows you to quickly put someone into your address book by simply bringing the two phones close to one another and confirming the transfer. The patent is especially clever in that it has workarounds using Wi-Fi or Bluetooth for situations where one device doesn’t have the necessary NFC software or hardware installed – no worries if you’ll have something older than the iPhone 4. Now, when those vCards get transmitted, they can also initiate a Facebook friend request, as shown above. Of course you still have to approve the other person and log in and all that jazz, but it all sounds relatively painless.

Bump has proven that these kind of interactions are not only possible, but that they’re inherently hip. I am a little worried for Bump now that Apple has a patent application that could effectively rip out their still-beating heart, but for the greater good of universal, social NFC functions on a tonne of iPhones, it’s a fair trade. Imitation is the highest form of flattery, they say.

Oh, also, Facebook Connect, which has been available for iPhone for awhile now, may become a part of Apple’s native SDK soon. It looks like it was pretty easy before, but being right there in the SDK will enable even more apps to quickly become social.

Digitimes Senior Analyst Ming-Chi Kuo is claiming that Foxconn is going to ship 4.5 million 4th generation iPhones during the...