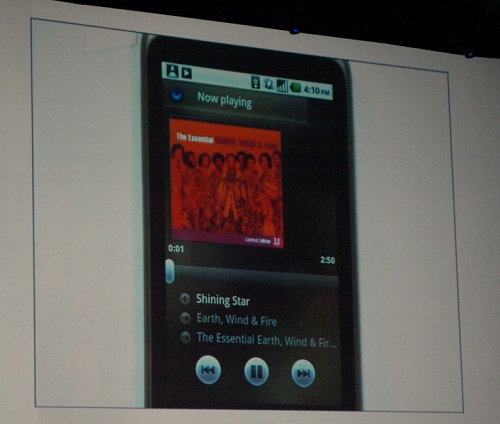 Android 2.2 is wonderful and all, but Google gave us a sneak peak at some future capabilities of its mobile platform that look absolutely stunning.

One of Android’s main weaknesses compared to the iPhone is the Android Market and the lack of a desktop client for syncing your apps and media. Google is trying to address those problems with this newfangled thing called the Internet. That’s right folks, we’re talking over-the-air app updates, installations and streaming music directly to your device without the need for wires.

The Android Market website has recently received a minor update but a future version will offer much better search functionality and a revamped interface, Google said. You’ll eventually be able to go to the Android Market website on a desktop, sign in with your associated account and have apps pushed directly to your devices. This is a great way to discover new apps because you won’t need your phone handy when you’re reading about cool new apps on publications like this one.

An interesting thing is that Google said its market will be for more than just apps, as you’ll soon be able to purchase music from it. That’s a clear shot across the bow at Apple and its iTunes juggernaut. If you don’t care about purchasing music because you already have terabytes of it at home, Google will also have your back.

The search giant purchased a company called Simplify Media and it will use this technology to let you stream all of your unprotected music to your Android handset. The demo showed you’ll even be able to use iTunes for this, which was another thinly veiled shot at Steve Jobs’ company. It’s unclear if this will work over 3G or just WiFi, but we’ve seen multiple streaming music apps that work over mobile data networks.

There’s no definite word on when we can expect these features to hit that little, green robot but we already know that the next version of Android, Gingerbread, will hit in the fourth quarter. We’ll keep our eyes peeled, friends.

If you watched our live-blog coverage of Google's I/O keynote this morning, you know that the search giant has introduced...