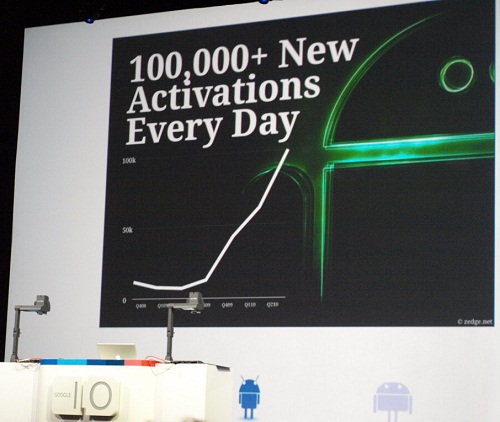 While Android 2.2 and Google TV will get the most hoopla, Google also unveiled some interesting statistics which show Android is really picking up steam.

The search giant said it is now seeing more than 100,000 Android activations per day. As you can see from the picture above, the growth trend is staggering. In fact, Google said a month ago that is was seeing merely 60,000 activations per day, so the availability of top-notch devices like the Droid Incredible is already having a tangible impact.

Google also said Android devices are the second-most purchased smartphones in the United States, trailing only Research In Motion’s BlackBerry. Unlike Apple’s iPhone OS or BlackBerry OS, Android is freely available to handset makers and we’ve seen phones from a variety of companies including Motorola, HTC and Sony Ericsson. The little green robot also recently passed an important milestone by outselling the iPhone in the United States last quarter, according to NPD figures.

The Android Market is also rocking and rolling, as Google said there are now more than 50,000 programs in the app repository. While this is still dwarfed by the number of programs in Apple’s App Store, it’s a clear signal that developers are taking interest. Froyo also offers some cool new tools for devs too. The Cloud to Device API can create deeper integration between the desktop and mobile phones and the Application Backup API makes it easier for Android users to take their apps and app data with them as they change devices.

To put these numbers in perspective, the trend indicates that there could be as many as 36 million Android handsets sold this year (using back-of-the-napkin math and assuming a steady growth curve). That’s an impressive figure when you consider that Apple is reportedly looking to ship 24 million of its next-generation iPhone 4G/HD. Of course, Apple makes a tremendous profit off each iPhone sold and Google doesn’t. Don’t feel too bad for Google though, as it’s seeing a 5X growth in mobile search traffic and that should continue with the success of Android.

Google TV is full of promise, here’s why

As we'd been speculating over and over again, today Google TV was announced. I made a lot of speculations with...