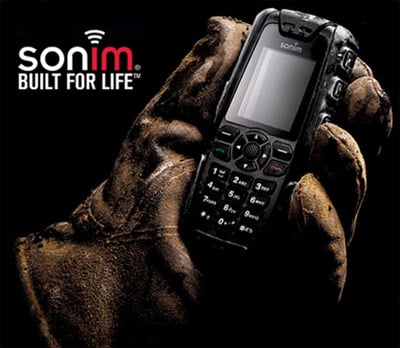 Sonim Technologies, the folks behind the ultra-rugged phones some of which we covered in the past, announced $9 million in Series 4 financing. Verdoso Industry and Waveland Capital Groups led the round, which also included existing investors. The company will use the new money to expand sales and marketing efforts globally while also accelerating the development of three new phone models that will be announced in 2010.

Hear that? Three new Sonim phones will be unveiled this year, hopefully at least one of them rocking some smartphone OS.

Anyway, along with the money come new Board members and they are Franck Ullmann from Verdoso, John Allen from Arc Associates and John Giere, Senior Vice President, Product and Marketing at Openwave; whereas Richard Long has joined as CFO.

As a reminder, Sonim has recently announced two phones, the XP2.10 Spirit and XP3.20 Quest Pro, with both of them being IP67 rated. Their philosophy is to make devices that work under harsh conditions and minimal access to electrical outlets…