News of Apple’s latest milestone has just hit the wires, and it looks like Apple is riding the iPhone wave to overtake Microsoft as the largest tech company in the world, as far as market capitalization is concerned. The Cupertino-based iPhone maker has just hit a market cap north of $227 billion, as Microsoft’s stocks take a bit of a dive. That number alone is enough to give Steve Jobs & Co. the distinction of being the single-largest player in tech on the planet.

With the iPhone and the iPhone OS-powered iPad tablet burning up the sales charts and leading their respective markets, it’s clear that Apple’s mobile aspirations are to thank for putting the company at the top of its game. Keep in mind, though, that market cap has to do with more than just the stock price, and is the reason that Google – with its stratospheric stocks – is not the leader in the tech space. A quick little search on Wolfram Alpha shows how Apple, Microsoft and Google compare in terms of stock price and market cap: 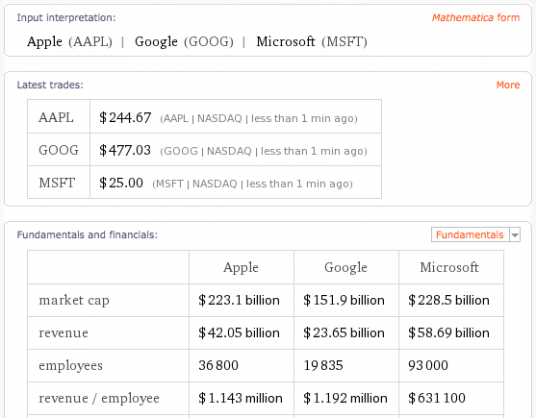 What’s important here is that Apple has managed to grow its business on the back of the iPhone, iPod Touch and the iPad. The iPad is expected to bring Apple $1 billion in 2010 revenue all by itself, not even counting iPhone and Mac revenues. That’s a lot of green. Microsoft, on the other hand, has been struggling to compete against the iPod Touch and the iPhone. The Zune music player, although eye-catching and easy to use, pales in comparison to iPod sales numbers. The Windows Mobile platform has failed to hold onto the smartphone market that it helped create. But, it should be interesting to see how Microsoft fares against Apple once the Windows Phone 7 platform goes live later this year – potentially debuting on the HTC Mondrian.

Wired is bringing its technology-magazine goodness to the iPad thanks to a little help from Adobe. The magazine has worked...