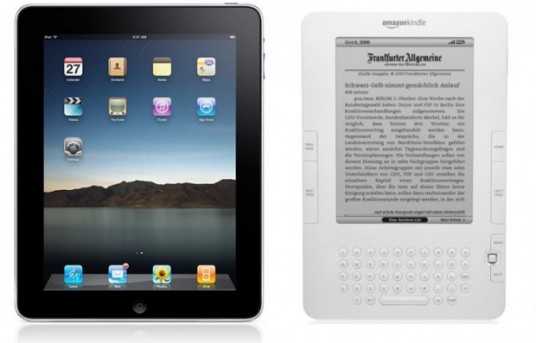 If you thought the iPad was going to throw some “hurt” in the Amazon Kindle e-reader’s direction, you’re probably right, but Amazon’s CEO wants you to know that their e-ink tablet isn’t directly competing against Apple’s iPad. During a shareholders’ meeting, Amazon chief Jeff Bezos stated that the company was going to keep the Kindle focused on e-ink technology and cater to consumers that want eye strain-reducing eBook readers and longer battery life. In essence, Bezos confirms that the purpose-built tablet isn’t playing in the same ballpark as the iPad, and will instead target “serious readers.”

To clarify, both devices are tablets, but they differ in one key aspect. The Kindle uses an e-ink display that only draws power when it displays a new page or text while the iPad uses a backlit LCD display that draws power whenever an image is splashed on the screen. The e-ink technology is easier on the eyes, since it doesn’t require a backlight and reads more like the traditional ink-on-paper setup. On the other hand, the more power hungry LCD display can show color images and even video. Amazon is apparently banking on consumers that want to keep eye-strain to a minimum and battery life to a maximum, as opposed to Apple’s strategy to appeal to content consumers that are hungry for the web (wherever they may be).

“The Kindle will compete with these LCD devices like the iPad by being a very focused product,” Bezos said during the shareholder meeting. “Serious readers are going to want a purpose-built device, because it’s an important activity for them.” He went on to reference the ubiquity of cameras in smartphones, nay mobile phones, these days. Despite the prevalence of cameras in phones, there’s still a big market for  dedicated, stand-alone cameras. “If an activity is important, you get dedicated devices,” he said.

The gist of the matter is that Amazon doesn’t see the Kindle competing against the iPad on the iPad’s battlefield. Rather, Amazon plans to keep fighting its own fight to draw in customers that don’t want all the snazziness off a color display and video playback and web browsing and emailing and… well you get the picture. We just have to wonder how the Kindle and its aging hardware will fare if the next-generation iPad launches with a hybrid e-ink/LCD display.

Apple, Dell and Hewlett-Packard are launching investigations into its suppliers after multiple suicides and a wave of reports suggest the...