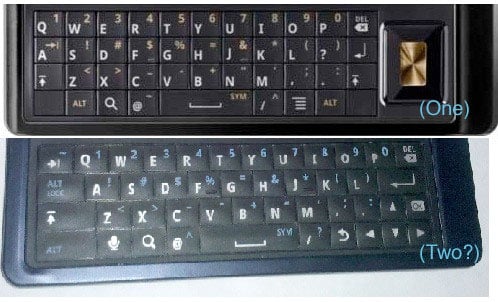 Over the weekend, there was some talk about a Droid 2 coming to Verizon, bearing the model number M1955. A picture of its supposed keyboard has snuck out, and before you ask, no, it’s not the Shadow – the Shadow is pure touchscreen slate. What’s pictured here is likely the second of two Android phones Motorola is working on for Verizon, and comes along with few specs, other than a 3.7″ display identical to the original Droid. The keyboard looks like it’s going for a more bubbled look, kind of like the Cliq, which should make for much easier typing than the flat, slightly concave keys on the original. The lack of a directional pad is interesting – maybe we’ll see an infrared trackpad on the front slide, or maybe Motorola will skip it altogether in favour of pure touch.

We had seen the Motorola Droid 2 cruise by the Wi-Fi Alliance, and now that pictures are coming in, it likely won’t be long until we see it go live. It would have to do a fair bit to beat out the Incredible for buyers’ affections, but I guess we’ll just have to see what kind of specs the Droid 2 has to offer before ruling it out of the fight.

Nvidia CEO: Android is where it’s at for tablets

Jen-Hsun Huang, president and CEO at Nvidia, just gave Android a wet, sloppy kiss, as he said hardware makers are...