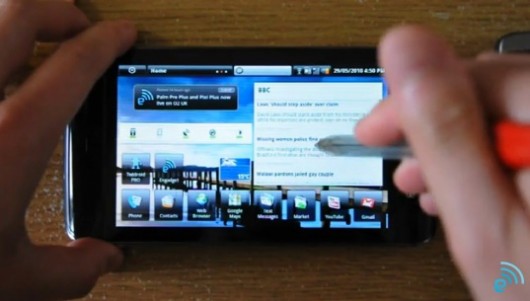 The guys over at Engadget either have it out for the Dell Streak, or just testing out the device’s Gorilla Glass screen. We’re going with the latter, but the video is just not easy to watch for nerds like myself. No matter how tough a glass display claims to be, there’s nothing more cringe-inducing than seeing someone use pointy objects to assault a glass screen.

As you can see from the video, Gorilla Glass is damn sturdy, which is itself an understatement. The test left the Dell Streak unscathed,  besides maybe some ink from the pen. Still, that’s a good move on Dell’s part to add a sturdy screen to their device, as it’s aimed to be more than a smartphone. Not to mention that the sheer size of the display opens it up to more potential damage (sitting on it, keys scratching it, dropping it on the floor, etc.).

Gorilla Glass is a type of glass that’s used in some mobile phone displays. Gorilla Glass is what was used to make the Motorola Droid display, and will be featured in the upcoming rugged Motorola i1 iDEN phone as well. We had a chance to put the Gorilla Glass display on the Sonim Spirit ruggedized mobile phone earlier this year, and we can say with confidence that the glass is capable of withstanding almost anything you throw at it. We used the glass display on the Spirit to hammer a nail into a piece of wood. That’s crazy!

Check out the video after the jump!

How many N900 units has Nokia sold?

Well, there's some confusion about how many Nokia N900 units the world's largest handset maker has sold, as a report...