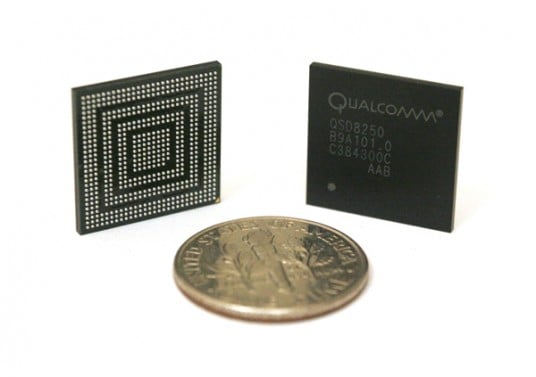 The bar for processors has been raised yet again by Qualcomm, who have today announced the MSM8260 (for HSPA+ phones) and MSM8660 (for EVDO Rev. B phones), both dual-core processors clocking in at 1.2 GHz. Contained inside are integrated low-power GPS, Open GLES 2.0 for 3D graphics, 1080p video encoding and decoding, and support for displays up to 1280 x 800. Another chip in the same class, the WSD8672, is running even faster 1.5 GHz.

The Snapdragon family now numbers three generations of chipsets, but it will likely still take time for manufacturers to get their mitts on these new processors (which are currently only floating around as samples), and get phones that use them out onto the market. 1 GHz processors are slowly becoming the norm for high-end smartphones, enabling some great gaming opportunities, and squeezing as much power out of limited battery technology. It’ll be nice to see how drastic an improvement these two chips are over the old Snapdragons, and even if it isn’t a huge leap, by processor speed alone it’s a solid incremental gain.

Dell Streak Coming to UK through O2 on June 4

Dell's daring 5" tablet/smartphone hybrid will be making its debut in the UK on June 4 through O2. The Streak,...