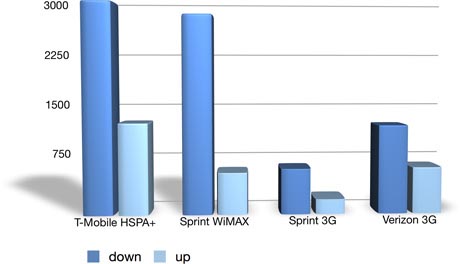 Sprint may be the only network using a 4G WiMax network in this country, but T-Mobile is catching up fast with the roll-out their HSPA+ network, which can reach “4G speeds.” But, just how close does T-Mobile’s HSPA+ network come to Sprint’s WiMAX network? Well, our friends at PhoneScoop have conducted some data speed tests in Philadelphia, PA and pitted Sprint’s mighty 4G network against T-Mobile’s 4G data network. The results are interesting indeed!

The data speeds were tested on T-Mobile, Sprint and Verizon networks in 6 different locations in Phili, and here’s what they found. Sprint’s WiMAX topped out at around 4,066 kbps download and 978kbps upload speeds, but other tests conducted gave them speeds somewhere near 748 kbps down and 60 kbps up. That’s a pretty drastic range of speeds, but we’ll take em’! Sprint’s WiMAX networked averaged out to 2,785 kbps down, and 589 kbps up. Not bad at all, Sprint, not bad at all.

Still, keep in mind that you’re probably going to get different results if you decide to test out both Sprint and T-Mobile’s 4G networks for yourself. The differences in average data speeds between Sprint’s WiMAX and T-Mobile’s HSPA+ networks is small enough that we can attribute the discrepancy to real-world variables that can’t be controlled.

Both carriers are aggressively rolling out their new networks across the country. Sprint is building a new infrastructure  for WiMAX, and T-Mobile is just upgrading their existing 3G network. At this point, T-Mobile is hitting higher maximum data speeds with their HSPA+ network. But, don’t count Sprint out just yet. Sprint is still in the midst of building out their WiMAX network, which requires entirely new infrastructure, and they’ll have a nationwide WiMAX network soon enough. And, because WiMAX and LTE infrastructure is fundamentally compatible, we could even see Sprint and their 4G network partner, Clearwire, switching to the faster LTE technology in the near future.

We’ve got our fingers crossed.

[Via: PhoneScoop and PhoneDog]

As expected, the much-lauded HTC EVO 4G is now available on Sprint for $199.99 on a two-year contract. With WiMAX...