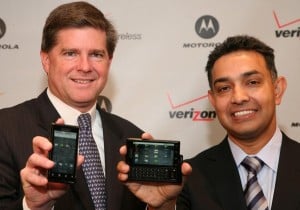 After seven months on the market, the Motorola Droid is surprisingly doing very well. According to Motorola, there is still a strong and steady demand for the Droid despite competition that has arisen in the market – especially Verizon’s Droid Incredible by HTC. After all, the device is still a great piece of hardware with a sharp, 854 x 480 screen and a build quality that feels like it can withstand a drop from a 12-story building.

It’s also tough to say that the devic seems like it’s aging rapidly when its software is evolving with the rest of its competitors. When the Droid was released in November, it came with Android 2.0. In March, it received Android’s 2.1 update and pretty soon, it will be sporting Android 2.2, or Froyo. The Droid will get these updates much sooner than its cousin on the same network, the Droid Incredible, because it doesn’t run a custom UI (the Incredible runs Sense) that has to be updated to play well with Android updates.

“If I could build more I’d sell more,” says Sanjay Jha, Co-CEO of Motorola. Apparently the manufacturer is running into the same supply issues that HTC had with the Incredible.

Not one to rest on his laurels, however, Jha says this year’s phone line-up for Motorola will include two to four devices with front-facing cameras for video chatting. Perfect timing since the iPhone 4 and EVO 4G both have front-facing cameras and are capable of video chat as well. If the new devices land on Verizon’s network, there’s a chance that Skype, who has already struck up a deal with Verizon, might have video chat working over the 3G network.

Either way, we’re happy to hear that the Droid, Motorola’s comeback device, is still going strong and that Motorola has more goods on the way.

Last time we talked about Aava, they were putting Intel's processors inside a smartphone a little larger than an iPhone....