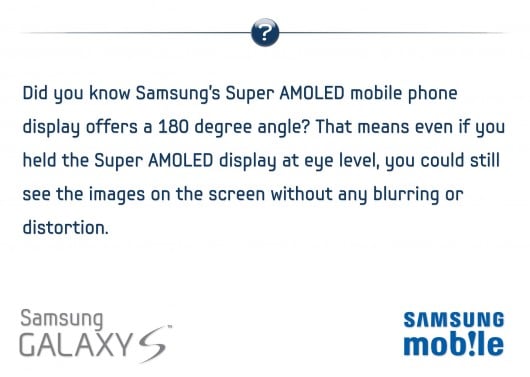 We already knew the Samsung Galaxy S‘ (and Wave’s) Super AMOLED display is miles better than your standard AMOLED screen, but we weren’t aware it has a 180 degree viewing angle! Even when viewing a Super AMOLED display on its side, you’ll get an undistorted picture, according to this little note that we got from Samsung today.

Just yesterday we saw the Galaxy S hold its own against the Xperia X10 and HTC Desire in direct sunlight viewing tests. While the Galaxy S didn’t necessarily come out on top (the X10’s LCD screen was more easily viewable), it shows how much of an advantage the new Super AMOLED technology has over a regular AMOLED display. No longer will you have to squint when taking your phone out in the sunlight if you have a smartphone using a Super AMOLED screen, it shows up much more clearly than you’d see it on a Nexus One or HTC Desire. But we’ve yet to see the Galaxy S put to its ultimate rival, the iPhone 4 and it’s Retina Display.

The iPhone 4’s new IPS Retina Display is certainly the only real rival to Samsung’s Super AMOLED screen technology. How they will perform against each other has yet to be tested and put on video, but it should be quite a showdown. Initially, it was rumored that the new iPhone would actually ship with a Super AMOLED display, but if that was ever true it was probably canned on the fact that Samsung is having trouble keeping up with the demand for standard AMOLED screens, so Super AMOLED screens would probably be even less readily available. So it’s easy to see why Apple chose the kind of screen they did, whether they had plans to use Samsung’s screens or otherwise. Something the iPhone 4’s Retina Display has on the Galaxy S is that the resolution is much higher, which should increase the clarity, and the pixel density on the Retina Display is claimed to surpass the human eye’s ability to resolve individual pixels – just amazing.

Samsung decided to share their thoughts on the iPhone’s Retina Display, saying, “Quadrupling the resolution on the screen would only increase the clarity at most only three to five percent,” and that the Retina Display is too power-hungry, which drains the battery up to 30% faster than you’d find on their Super AMOLED screens. Apple added in a larger battery in their new device, but will the extra juice be negated by its screen? That remains to be seen, but I think it’s safe to say that it should be fine.

Time will tell which screen technology is better for you, as we’ll be sure to put the two devices head to head when we can get our hands on both devices. Both technologies your device a crisper display than you’ve never seen before, and that’s a win in anyone’s book. It’ll be interesting to put the 180 degree viewing angle to the test. Stay tuned!

Yesterday we saw the iOS 4 officially hit the iPhone 3G, 3GS and the iPod touch and folks got to...