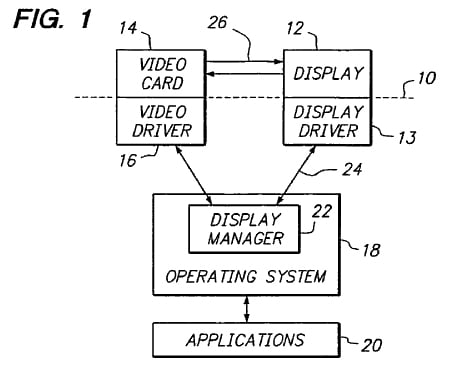 In addition to the 20-odd patents that Apple is suing HTC for infringing, there’s one more that Apple has added this week to their Delaware lawsuit:  “System for real-time adaptation to changes in display configuration”, which is described as:

A hot-plugging capability for video devices is achieved by shifting the responsibility for recognizing changes in the configuration of a display environment from a computer’s operating system to a device manager.

When an input/output device is added to or removed from the computer system, an interrupt signal informs a device manager of the fact that a change in configuration has occurred. In response thereto, the device manager determines whether the changed component relates to the computer’s display function.

With this change in the configuration of the display space, the added component becomes immediately available for use.

What exactly that all means is anybody’s guess, but you can take a look at the patent, which is split in two, over here.

Updating to iOS 4 on your iPhone 3G

Updating to iOS 4 on any iPhone 3G or 3GS should be easy-as-pie, and it is. However, after having read...