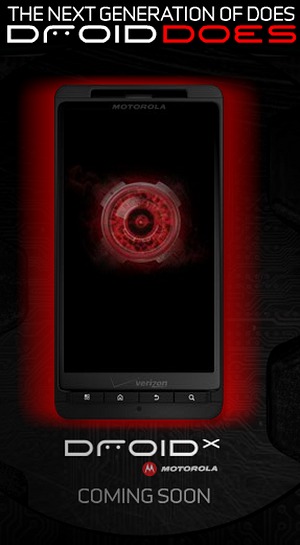 To help jog your memory, the Motorola Droid was the first Android phone to launch with the new generation of Android OS – Android 2.0. It was, at the time, the best thing to happen to Google’s mobile operating system. But, that was last year. As it stands today, Motorola has competition coming in from all sides, in the form of the Sprint HTC EVO 4G, the Verizon HTC Droid Incredible, the impending iPhone 4 and Google’s own Nexus One. The company’s answer to this smartphone onslaught? The next iteration of the Motorola Droid.

At this point, we know that the Droid X will sport a 4.3-inch touchscreen, HDMI-out and an 8-megapixel camera. We’re also expecting to see a 1Ghz processor and full 720p HD video recording. We’ll know more in a bit, stay tuned!

According to a screenshot from their internal network, T-Mobile will be rolling out an Android 1.6 update to Samsung Behold...