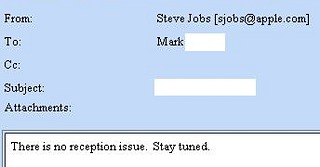 “There is no reception issue,” says Steve Jobs of the iPhone 4. Sure, we’ll buy that along with the bridge he’s selling. It’s not like it contradicts the multitude of reports all over the web, documented on print and in video by customers and journalists alike, that show Jobs that he’s wrong. Even Apple had to address the issue with some lame excuse that all phones have this issue to a degree, thus leaving us sore and incredulous. And it’s not like Steve Jobs contradicts himself when he told another frustrated user not to hold the iPhone in a certain way to keep the issue from arising.

What’s interesting here is Jobs’ follow up, predictably brief and somewhat curt. “Stay tuned,” he says. Whatever you say, Steve.

While many users have been unable to replicate the issue no matter how hard they try, the fact is that this is an issue. How so? There are enough reports everywhere by several users that make it so. Even if only one out of every hundred iPhone 4s is affected by this issue, and Apple really did sell 1.5 milion iPhones on launch day, that’s 15,000 affected units from day one out there right now. That’s not good.

It will be interesting to see what Jobs and company have in store for us regarding this problem. Stay tuned. Could it be a software fix like many have been speculating? Is it even possible to solve a hardware problem with software? I understand I’m being a little harsh and maybe even a little jaded, but just take a look at how Apple and its CEO have responded to this issue. I’m surprised that more people, not including the blind apologists, aren’t bothered by the Apple’s cavalier attitude about its prized smartphone and whether it works as it should or not. So yes, let’s stay tuned indeed and see what Steve and company has up its sleeves.