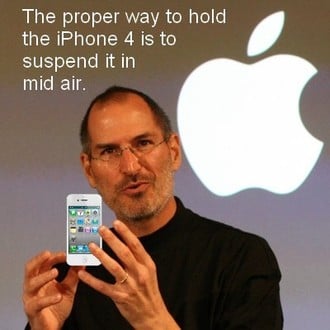 There’s a really old joke that goes, “Doctor, my arm hurts when I move it this way,” and the doctor replies, “So don’t move it that way.” It’s stupidly funny because it’s such a simple solution, but it doesn’t really fix the problem. In the case of Steve Jobs, however, if he were the doctor he wouldn’t just tell you not to move your arm that way, he’d tell you that your arm really doesn’t hurt at all.

When users started complaining about the iPhone 4’s reception problems, some decided to take it straight to Apple’s CEO. “My iPhone doesn’t work properly when I hold it this way,” some user cried. In typical Jobs fashion, his terse response was, “Just avoid holding it in that way.”

Oh, but it didn’t stop there. After receiving another e-mail complaint, the megalomanical Jobs asserted us that there is no iPhone 4 reception issue at all and asked us to “stay tuned.”

So here we have a widespread problem that Apple has acknowledged with an excuse that all phones do the same thing to a degree, and its response, along with its CEO, is that it’s not that big of a deal. Then we’re hit with another follow up that assures us there is no issue at all. I’m confused!

If I bought a new Macbook Pro and the “E” key didn’t work, would I accept a response from Steve Jobs that said, “Just don’t us that lttr. Not that big of a dal.” Hell no! So what makes him think, aside from his ego and the idea that he creates some of the world’s most magical products, that iPhone users would accept his unusual and insulting solution to the smartphone’s antenna and reception problems. Oh wait, there are no reception problems.

Steve, I like your products. I think they’re some of the best gadgets on the market, if not the best, today. But please make up your mind on the issue/non-issue we have with the iPhone 4 and fix it fast. Thanks.