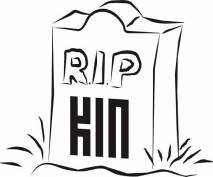 The Microsoft Kin was gone before it ever really had a chance, but its memory will live on. Or at least for as long as someone remembers to pay hosting fees for KinRIP.com, an online memorial site for those looking to grieve the Kin’s untimely passing. Microsoft’s little social networking device was an enigma, but some of us actually liked the little thing and the cloud services it had to offer. The memorial site has a gallery, a guestbook for those who want to pay respects and a section for those who want to share their Kin stories. We’re guessing that the guestbook and story entries won’t exceed 500 posts, but don’t ask me why.

This memorial website was created in the memory of our loved one,
Microsoft Kin who was born on May 13, 2010 and passed away on June 30, 2010.
We will remember her forever.

If you browse the site, you’ll be treated to the appropriate background track “Gone Too Soon” by Michael Jackson. It really adds to the melodramatic mood, and somehow, to the hilarity of it all. The sad part? There are human beings out there whose candles flickered out too soon that don’t get this kind of attention or dedicated memorials and vigils. Ah well.