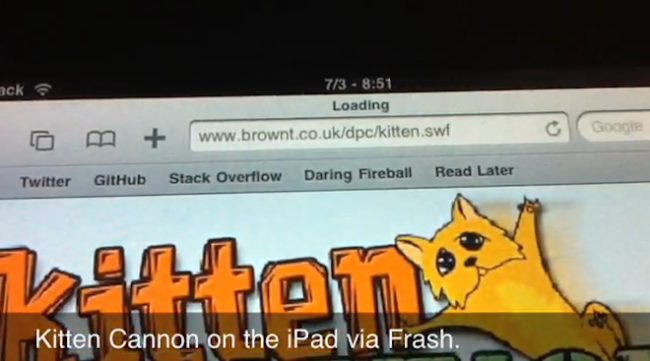 One of the drawbacks of Apple’s “magical” iPad is that Apple and Steve Jobs have vehemently kept Adobe’s Flash technology from running in the Mobile Safari browser. Jobs & Co. argue that the open HTML5 standard is more than capable of delivering much of the rich online media that we’ve gotten used to over the years – the stuff that Adobe wants you to consume through Flash. But, there’s no getting around the fact that there’s still a sizable chunk of the internet that just doesn’t work correctly on the iPad and iPhone and other iOS devices (“iDevices,” if you will). Thankfully, the always helpful iPhone developer community has ported Flash to the iPad. The port is called “Frash,” and it’s in the early stages of bringing full Flash content to your iPad.

Comex, iPhone hacker extraordinaire responsible for the recent “Spirit” jailbreak, is the brain behind this iPad-compatible version of Adobe’s Flash runtime. The Frash port is based on the Adobe Flash 10.1 Player for Android that we’ve seen running on Android phones with Android 2.2 Froyo OS. With Frash, Comex was able to run Flash applications natively from within Mobile Safari (the iPad web browser). As you can see from the video, Flash apps seem to run fairly well on the iPad.

And, since Frash uses something called a “multi process model,” it won’t crash your entire Safari browser when Flash/Frash decides to take a nose dive. To be more specific:

Frash uses a multi-process model similar to Chrome on the desktop, so a crash in the Frash/Flash plugin doesn’t take down the browser. You can see this while I’m playing Alien Hominid: the ad above crashed (probably a Frash bug), but Safari stays open just fine, and continues to play other Flash content on the page.

As it stands, Frash for iPad is not yet stable enough for public release. Video and keyboard inputs are not yet supported either – Comex says keyboard support should be easy enough to add but video support is going to take a bit longer.

For now, we’ll have to wait for the world to adopt HTML5 or Jobs to relent and give iOS a bit of Flash love. Hell, even Google supports Adobe’s interactive web technology by way of Youtube.

Check out the entire Frash demo running on an iPad below.

One tiny detail we overlooked in Apple's last statement confirming the iPhone 4/iOS 4 reception problem was "if you are...